While gaining much attraction from media, the bioplastic – market is still in its infancy. Biomass derived plastics currently make up about 0.2% of the roughly estimated 350 million tons of plastics consumed annually. But that volume will grow 30% a year due to the rising demand of environmentally friendly substitutions for packaging and products for the automotive and electronic industries. The market development has received a substantial boost from price increases in crude oil and petroleum-based plastics. Legal framework conditions – such as the ban of non-biodegradable plastic bags – have also contributed to the continuing boost.

Currently, the biggest market share is held by thermoplastic starch (and blends made thereof) accounting for about 60% of the biopolymer consumption. The biodegradable starch is followed by PLA (polylactic acid) accounting for 20% and cellulosic acetate (15%). All other obtainable bioplastics – such as PHA (polyhydroxyalkanoates) – hold a market share below 5%, at present. Referring to experts’ opinion, PLA is the biopolymer which shows the highest growth rates. 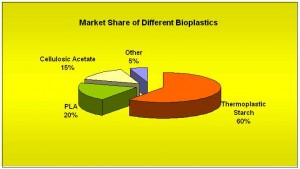 A further driver of the enlargement of this sector is the expanding consumer demand. To serve the rising demand, many companies now turn into the production of ecologically friendly polymers. Besides the established manufacturers of PLA (polylactic acid) such as Galactic, Nature Works and Purac also enterprises from the automotive industry like Toyota and Mazda have announced to get into the production of this biodegradable material. This is mainly to satisfy the companies’ internal request since such materials become essential parts of their vehicles.

NEC, the Japanese electronics company, has used an extract from cashew nut shells and plant cellulose to create bioplastics that indicate improved characteristics compared to starch-based bioplastics. NEC plans to begin using the nutshell-based plastics in its products by 2013.

PHA is produced, for example, by Procter & Gamble and Metabolix. Metabolix seeks to improve formulation of its biobased polyhydroxyalkanoates (PHA) to develop an ecological alternative for plastic bottles.

The companies mentioned above are just a small selection of a broad variety of bioplastic producing firms. As the change to biobased materials continues, the global advantages are twofold: positive impact on the environment and rising economic opportunities. We mustn’t miss this chance!