Currently, algae receive great attention due to their potential to become an alternative to fossil fuels. There is much talk about this new source of biomass for the generation of renewable energy and maybe some other commodity chemicals too. Algae can yield a high amount of biomass per unit of light and area, do not require agricultural land and have high oil or starch content. They multiply their weight several times a day, and the production of biomass is tremendously higher than by any other known source. These versatile organisms can be cultivated in wastewater, freshwater or even brackish water, in the sea or in ponds. Amazing and fascinating is their ability to grow without needing anything but light and carbon dioxide. A variety of different bioreactors are designed for efficient cultivation and harvesting of algae. Furthermore, combustion gas can be used to satisfy the demand on carbon dioxide. This fact promises to reduce industrial emission of this green house gas by simple filtering the exhausted gases through an algal bioreactor. By now, about 30.000 species of algae are known. One great benefit of algae as a biomass is that it can be used to produce an array of biofuels (algal oil, aviation biofuel, biodiesel, biogasoline, biomethane, biobutanol, bioethanol, and even hydrogen).

The first distinction that should be made is between microalgae and macroalgae (or seaweed). Microalgae have numerous species with varying compositions and without any specialization they live as single cells or in colonies. Despite the fact that cultivating microalgae is easier and more controllable, a major drawback is their small size which makes consequent harvesting and the extraction of desired compounds more difficult. Macroalgae are less flexible since there are only few choices of species that can be cultivated. By now, the only viable technology is to produce biogas by anaerobic digestion of the algal biomass. 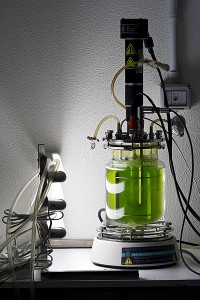 Solix Biofuels and BASF have signed an agreement to investigate the use of algae to produce certain chemicals for BASF.

Solazyme, in partnerships with Chevron, has recently tested its fuels on US Navy ships. Its technology has successfully been deployed at commercial manufacturing scale. DoE gave a US $21.8 million budget for the company to construct a demonstration plant. Soladiesel™ has gone beyond the requirements of ASTM D6751 for jet fuel, D-975, EN 14214 and Military Specifications. Solazyme microalgae generate linear fatty acids and esters that can be transformed into fuels and other value – added bioproducts.

AlgaeLink N.V. and KLM Royal Dutch Airlines are currently cooperating on a pilot project for the development of alternative aviation fuels from algae.

The European FP7 project BioWALK4Biofuels comes up with an innovative system for the biowaste treatment and utilization of green house gas emissions to generate biofuels, where macroalgae are used as a catalyst.

In the Biodesign Institute of Arizona State University, researchers have modified cyanobacteria (photosynthetic bacteria) to secrete oil, which can be harvested without killing the cells. To optimize microbial oil production, the technique could be applied for the conversion into biofuels. The Biodesign Institute is still doing research to optimize Photobioreactors (e.g. phosphorous, carbon dioxide light irradiance) for cyanobacetria.

Last year, a unique experiment was done in which jet algae fuel was used to power a two hour test flight of a Boeing 737-800 of Continental Airlines.

One acre of algae can generate sufficient oil to make almost 19,000 liters of biodiesel each year. It is for example anticipated that an area equal to half of the state of Mexico would be adequate to meet the energy demands of the entire USA. Another estimation by the company Energy Microlgae states: “In 2007-08 India imported 121.67 million tons of crude oil. In order to produce this much of fuel 365.01 million tons biomass are required annually. As per our biomass production achievement the land area required 2 million hectors. India has 60 million ha of degraded land”.

The potential of algal biofuels can hardly be ignored. Algae biofuels might be the clean energy solution that the world has been looking for.

This article is also available as podcast: