VERBIO Vereinigte BioEnergie AG (VERBIO) has just opened the world’s first industrial straw processing plant for the production of biomethane in Zörbig, Saxony-Anhalt. Marketed as verbiogas, the fuel is produced from agricultural residue, with VERBIO consciously refusing to use raw materials which could otherwise be used for food production.

“I’m very proud that we’ve managed to start up the first plant of this type anywhere in the world – and that we’re a technological pioneer setting new standards in the biofuels industry,” declared Claus Sauter, CEO of VERBIO. “It means we already have a biofuel production process in place which meets the demands for future fuel production expressed by both politicians and the public: no raw foodstuffs, no displacement of farmland and high CO2 efficiency – without charging consumers more.” 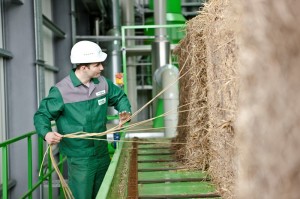 VERBIO has already been producing biomethane from distillery slop – a by-product of bioethanol production – in the world’s first biorefinery since 2010. The amount of straw available for VERBIO’s new biomethane production method is vast. The DBFZ German Biomass Research Centre in Leipzig has calculated that about 8–13 million tonnes of straw goes unused in Germany alone annually, which if turned into biofuel would run 4 million cars for a year. VERBIO’s new plant can convert 20,000 tonnes of straw into biomethane every year.

Compared to fossil fuels, the CO2 emissions of the biomethane produced will be up to 90 per cent lower than those of fossil fuels. Conditioned to the quality of natural gas and fed into the existing natural gas network, verbiogas is now already available at nearly 50 natural gas filling stations. With VERBIO supplying numerous municipal multi-utilities, including in Munich, Augsburg, Braunschweig, Dessau, Schwedt, Wernigerode and Wittenberg, local authorities are leading the way in climate protection. Moreover, the energy companies Mitgas, Wingas and Verbundnetz Gas have converted their filling stations to biomethane made from agricultural residue by VERBIO. As verbiogas (biomethane) has exactly the same chemical composition as natural gas, all natural gas vehicles can run on verbiogas in any mixing ratio without having to be converted in any way. 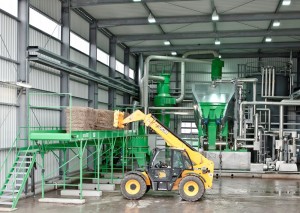 VERBIO will continue to expand its biomethane plants at its two production sites in Zörbig and Schwedt until 2015/16. It plans to increase its production capacity from currently 60 MW to a total of 130 MW – an amount which would enable over half the 900 natural gas fuelling stations in Germany to be converted to verbiogas.