Recently, Vattenfall, the largest thermal energy suppliers in Europe, celebrated the opening of a commercial algae-breeding facility at their premises in Senftenberg (Brandenburg), Germany. The facility, supplied by the Austrian company ecoduna, will use CO2 from the nearby power station, thereby reducing CO2 emissions. Vattenfall has been running tests on the reduction of CO2 through algae cultivation over the past few years and the success of these tests lead to their decision to construct the commercial algae-breeding facility with ecoduna. The cultivated algae species used in this facility is Chlorella Vulgaris. Generally, algae are supposed to be the one of the most important renewable resource for the future.

The technology developed by ecoduna is a breakthrough in the commercial growth of microalgae. Due to the reactor‘s use of a continuous process and its ability to make maximum use of sunlight, it is possible to convert high levels of exhaust emissions from power stations into valuable biomass. 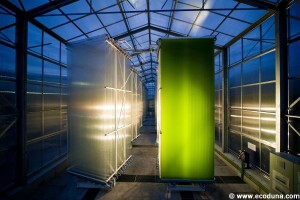 The ecoduna facility, with a photo-active volume of 50,000 litres is the second largest closed algae-breeding system world-wide. It incorporates a number of technical innovations:

Continuous flow; electric pumps are replaced by the use of natural phenomena; complete use of the sun’s energy through maximum surface, ideal maintenance of the algae through CO2 and nutrient supply.

Two more facilities are planned for construction next year with Cluster Biofuels Denmark and the British Company Green-Acres.

Ecoduna is also planning a number of large projects with the aircraft manufacturers EADS, and OMV to further promote the industrial utilization of algae.

Until now, it has only been possible to produce small quantities of foodstuffs, pharmaceutical products and cosmetics from algae. With ecoduna’s technology it will be possible to produce products on a mass-scale, for example fuel, eco-plastics and animal feed. The production of microalgae does not compete with the production of food on agricultural areas because of the efficient land use of this new technology. CO2 from exhaust emissions is incorporated and converted into biomass. Water is recycled within the system. The only „waste product is oxygen, which is liberated during photosynthesis.